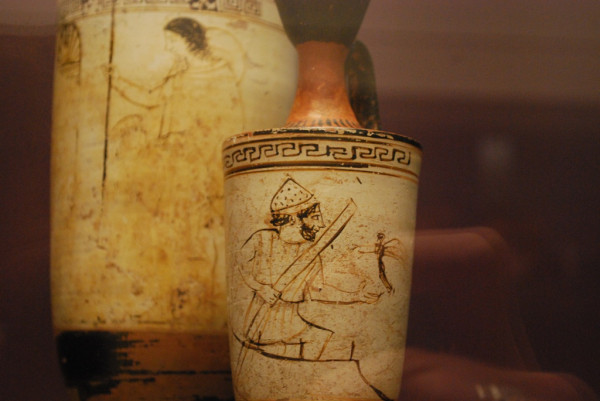 First posted 2009 a little after the Ashmole re-opened - a good point of the refurb was more pots (some rather than previously none, in fact), although at that point just one cabinet full of mixed ones, which this was in. There are more cases now too, and this one, still in the original miscellany by the foot of some stairs, now has a label so I now know it is Charon, looking not at all his usual dour self.

I saw it with label earlier this year - must have been Jan - before succumbing to this illness I was making lunch-time trips to the Ashmole and the University Museum, almost as if I knew something were coming - I remember thinking to myself that these little trips would be bucket-list items for me if I were on the way out - premonition as it turns out but also joking with self that my horizons were not large but also should celebrate & enjoy these things so easy to take for granted so nearby.

Cancer news: I've started round 2 of chemo, but oncology Professor not impressed by how round 1 went - liver is HUGE and not shrunken by chemo 1 which we would have hoped to see, so they were a bit in doubt over whether round 2 worth doing, but we'll do it and see in case it will start working better this time.
Collapse